The residents in East Harlem had the shock of their lives when they were woken up with a major gas explosion reverberating their neighborhood owing to a gas leakage on Wednesday morning. According to a statement issued from the office of the New York City Mayor Bill de Blasio, the massive explosion sabotaged a couple of five story buildings.

There have been reports of more than 200 firefighters braving the raging fires. According to the figures released by the New York City Fire Department, there have been a few deaths as well as several injuries. It is also being feared that a lot of people are still missing.

As the fire fighters put up a display of mind blowing relentlessness to stand in the way of danger to help out the needy, people in the neighborhood reported seeing drones flying around the destroyed buildings. There were rumours and conjectures that the local authorities were employing drones in their search and rescue operations. This is certainly not an unbelievable news since a local New York CBS affiliate covered a news story on how the New York City Police Department is planning to employ drones in their fight against the criminals. 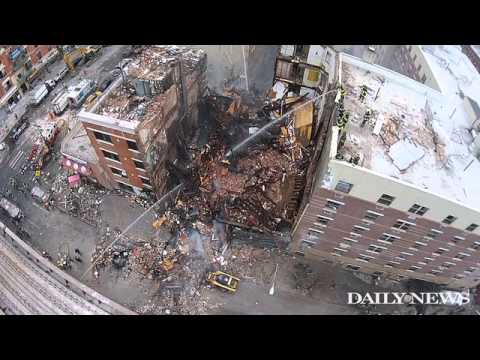 It seems as if the folks who circulated seeing drones around the burnt buildings were definitely fascinated by the fact that the New York City Police Department or Fire Department New York City were using drones. However, when the New York city’s Deputy Commissioner, Public Information (DCPI) was asked to comment over the issue, the use of drones was refuted in strongest possible terms.
LIKE TO READ  Top 12 drone videos

In a post published in huffingpost, it was reported that a bloke using a DJI Phantom was seen around the unfortunate area.