The overall rating is based on review by our experts

The FPV Race Wing phenomenon is catching on like wildfire across the globe. Like FPV quad racing, it connects the immersive action of First-Person View with a high-performance aircraft that’s easy to fly. The Blade® Theory™ Type W race wing delivers outstanding performance that’s user friendly out of the box. A perfectly sized and powerful wing for the growing FPV wing racing market, it features modular and easily removable wings for easy transport. Fully integrated flight components such as digital metal gear servos, AS3X® stabilization technology and SAFE® technology provide rock solid stabilization at blazing speeds. The high-output brushless motor accepts 3S or 4S Li-Po batteries to suit mild or wild flying styles. With all these features packed into such a compact airframe, there is still designated room for a Mobius or Legend style HD video camera, giving pilots the ability to record their high speed soaring. This FPV-equipped version features a 200mW 5.8ghz video transmitter with frequency control which lets pilots fly further without having to worry about video issues (HAM license required*).

The Theory W is equipped with Horizon’s revolutionary flight control software (SAFE), allowing you to control your flight experience at the flick of a switch. The Theory W is outfitted with multiple flight modes that makes wing racing easy even for the first time pilot. -Launch Mode: Provides self-leveling and a 10 degree rate of climb at full throttle. This take the difficulty of launching a wing even if you are already in the FPV goggles. Just toss like a paper airplane and add full throttle. SAFE technology takes care of the rest. No more awkward launches ending in a crash! -Intermediate Mode: Gives the pilot an unrestricted feeling during all bank angles until 90 degrees. At 90 degrees, the Theory W will prevent itself from rolling upside down. In this mode, you can learn to race at aggressive speeds without ever getting in a precarious situation. -Experienced Mode: Gives the pilot full control of the aircraft for high speed racing and only stabilized with AS3X.

One of the most exciting features of the Theory W is that it’s super easy to travel with! Unlike all other racing wings, it has plug in wings that can be removed for travel. Fit it into your backpack, suitcase or back of your small sedan. Each wing plugs into the aircraft with a solid “CLICK” and is immediately ready for flight in a matter of seconds.

The FPV camera in the Theory W is equipped with a customizable OSD so you can add your pilot name and monitor important flight battery voltage just by glancing away from the center of the screen. This camera is also equipped with a wide angle 2.1mm lens allowing you to see the next obstacle with ease.

The Theory W is equipped with the Spektrum 200mW video transmitter which is perfect for racing and more than enough for FPV exploring.

With a 1300 4S battery on board, the Theory W can sustain high energy racing for upwards of 7 minutes and over 10 minutes with moderate flying.

In the box, you will get a speed hatch and an HD hatch for using a legend or Mobius style camera. Both hatches easily snap on and fully protect all the gear onboard.

Brushless Motor Power up to 90+MPH

The 2205-2350kv brushless motor onboard can deliver blisteringly fast speeds and is mounted to a fast disconnect mount allowing you to upgrade your motor in the field!

Enjoy smooth power output from the 30 amp BLheli software ESC and more than enough headroom to allow for motor and propeller upgrades. 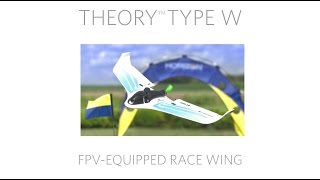