Siberian tigers literally tore apart a poor drone as it attempted to capture their video footage in their enclose in Heilongjiang province of China. The entire incident was recorded by another drone in the vicinity as the predators took down the machine.

The drone was owned by China Central Television (CCTV) and was being used to capture the aerial drone video of beasts as they played in snow.

The video starts off with the drone in full command, as it whizzes through the air and tigers making a run after it. The tigers do appear to have gained plenty of extra weight though! 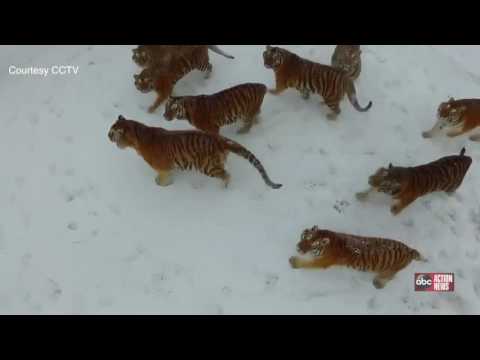 However, a slight error of judgement by pilot proved costly as it provided an opportunity to one of the beasts to lunge at the UAV and bring it down.

The feline species then circled around the machine and began to inspect it. The animals then chewed through the motor and appeared to have been frightened by the ensuing plumes of smoke.