Home
Blog
Can this Firefighting Drone be a Thing of the Future?

Academically speaking, a firefighting drone seems to be a wonderful concept. A drone can access places where a conventional ladder is not able to reach. Similarly, such a device can adjust angles at a rate way more quicker than a typical truck used by the firefighting squad. Here’s a good news for you all: A Latvian tech company named Aerones Ltd. is well on its way to developing a firefighting drone that could change the entire landscape of firefighting in the days to come.

LIKE TO READ  Droneboarding is the new sports on the horizon

What does the video show?

Having said that, a quick overview of the video lets us know that the company has still got a number of bases to cover. With regard to specifications, the drone weighs around 21 pounds and has the capacity of carrying a payload of about 319 pounds. Apparently 319 pounds may seem to be a lot of payload to be lifted, but keep in mind that with the drone attached to a hose filled with water can be quite a constrained contraption. Bear in mind that every single foot of hose can weigh quite a considerable amount, for instance, 100 feet of charged 5-inch hose can weigh around 944 pounds.

LIKE TO READ  Firefighting Spiderman Drone to the Rescue! 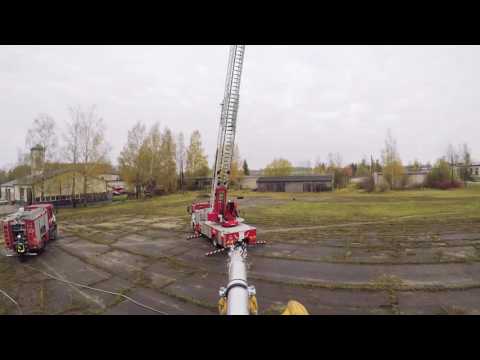 Are the manufacturers getting things right?

In this context, the proclaimed altitude of 984 feet to 1312 feet appears to be out of question. In order to achieve a height of about 984 feet, the drone will have to be limited to being attached to a hose of diameter well less than 1-inch. Now, if the drone is to be connected to a typical two and a half inch diameter of hose, it should be able to carry a payload of around 2,086 pounds at an altitude of 984 feet.

Despite all this discussion, we know that the drone is still in its development phase and so we hope that things will get better with time. The manufacturers are already working on moving from a drone powered by batteries to the one powered via a power cable so that it is able to function as long as required without any hindrance. To cut to the chase, we anticipate this drone to be a thing of the future; one that will definitely bring a revolution in the way in which firefighting squads carry out their operations.