It’s time to bring to you yet another revolutionary novel and innovative frame structure consisting of food items that will bring about a radical change in the way drones are flown about. To be honest, it’s stretching things a bit too far! But hey, it still looks quite a spectacular prospect!

Here’s the newly built quadcopter that boasts a frame design made entirely of chocolate. The quadcopter portraying a frame structure consisting of chocolate is about 1Kg in weight. Hence, with regard to weight, it certainly is not one of the lighter models on the market but it is one of the more innovative creations to have been developed by drone enthusiasts.

The frame structure was created by formulating a foam mold in the form of X to give rise to the general outline. Molten chocolate was poured into the mold. Subsequently, metal standoffs were placed into the arms to attach the motors. Once the assembly was ready, it was then refrigerated to get a hardened product. Once the main structure had been created, small sticks made of chocolate were then put intothe right spots after melting them in order to produce what we refer to as landing gear.

To be candid, this is quite an astonishing frame but is definitely not the first one made with the help of food items. The Pretzel Copter is probably the first quadcopter made with food. 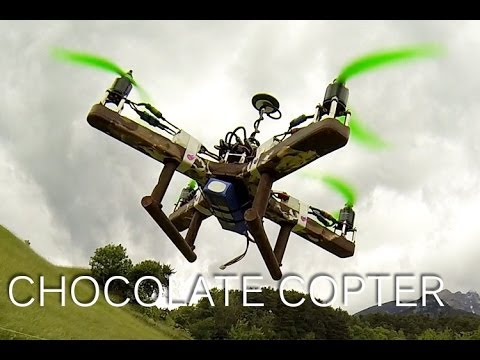