We have been trying out the FrSky Taranis QX 7 for the last few months or so and it has been able to deliver quite decent performance. Keep in mind that the QX7 is supported by all FrSky receivers. Once the original package is opened, there are manuals and stickers at your disposal.

The original packaging is similar to any other radio by FrSky radio encapsulated in Styrofoam and we can find the radio and a lanyard wrapped inside. We had already seen images of the radio on the internet but once you see it in reality, the modification in the design is absolutely spectacular. The same specific design pattern is followed by the more conventional Taranis X9D and the Spektrum radios but the new FrSky Taranis QX 7 boasts an entirely different design.

The design is pragmatic, it is wider, sleeker and the surface of the radio is flatter; which is a diversion from the Taranis X9D’s slightly curvier surface.

In contrast to the FrSky Taranis X9D, the display screen is smaller in size and the keys have also been revamped. The left side boasts the same page, menu, and exit keys, and the three keys to the right have been replaced by a scroll wheel and a large Enter key at the center. The keys have not been labeled but the whole key configuration is quite user-friendly, to be honest.

Flipping the radio upside down, we come to a JR-module slot and a compartment designated for the batteries. The inclusion of the JR module slot is a pretty nice move on part of the manufacturers. It enables the users to have their Spektrum and even the hobby-grade quadcopter receivers function without having any trouble. The users can also expand it further as and when required.

Now, when we come to the battery compartment, it is quite frustrating since the FrSky Taranis QX 7 uses 6 AA batteries. These batteries run out of gas pretty quickly which was our experience with the Turnigy 9X and so you will have to spend more in terms of the batteries. Having said that, there is always an option of using rechargeable AA batteries.

We did not want to remove the battery encapsulation since it was a borrowed radio but if you are interested, you may as well remove the encapsulation, solder on leads, and insert a 2 cell LiPo battery.

Here is a fun fact: Ever since then, I have come across a 3D printed case that can be housed in the LiPo tray and lets you use the 18650 cells. Here is a detailed post on FrSky Taranis QX 7 mods.

The rubber grips felt really comfortable and have been positioned in an appropriate manner to make you feel relaxed.

The radio can be triggered by holding down the power button and a cool blue LED gets illuminated. The radio that we tested came with Open TX 2.2.0, so the Taranis X9D should be well acquainted with the interface and user menus. Working around with the scroll wheel was quite fascinating as we felt that it was quite sensitive. The keys were tactile and just had a nice feel to them.

The speaker located at the center of the radio only beeps currently since there is no voice pack installed by default. You can easily find the Open TX 2.2.0 voice packs so that should not be an issue.

Furthermore, there are 6 switches and a couple of pots which is probably more than required for the majority of the multirotor pilots. The side sliders may be something that the fixed-wing pilots might not find here since they have not been included in the FrSky Taranis QX 7. 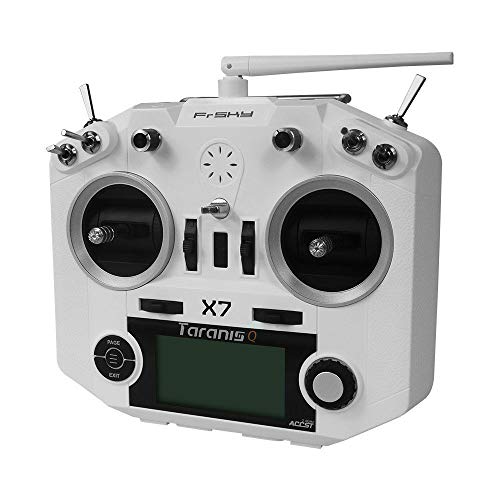 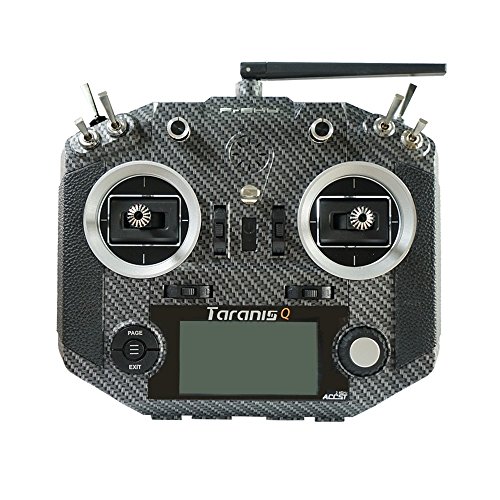 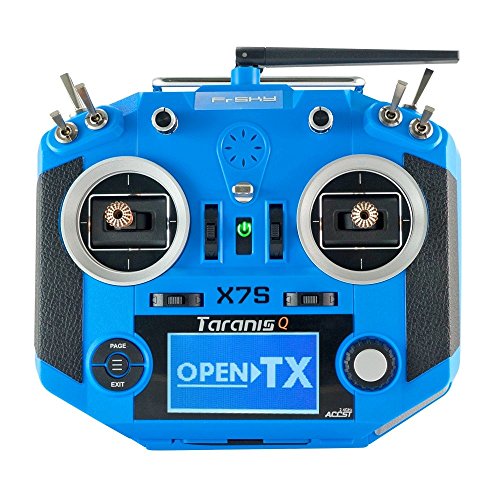 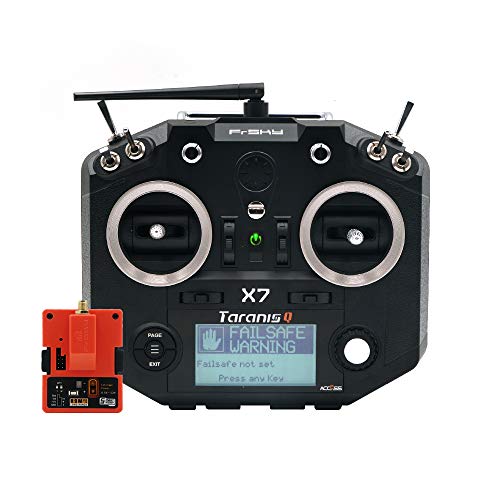 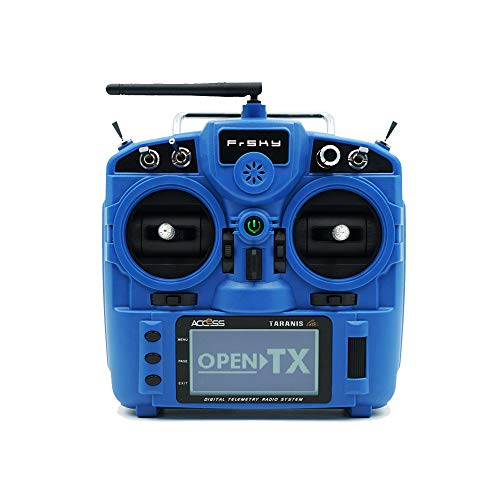 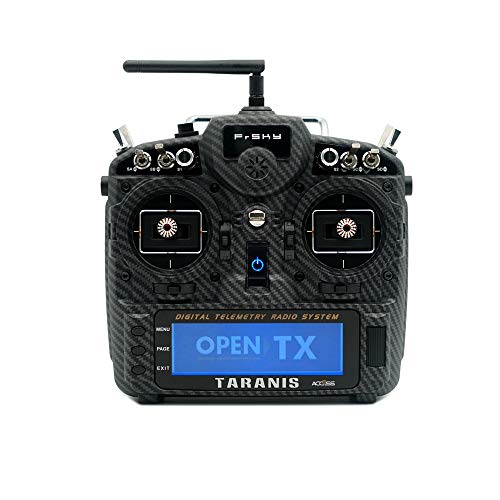 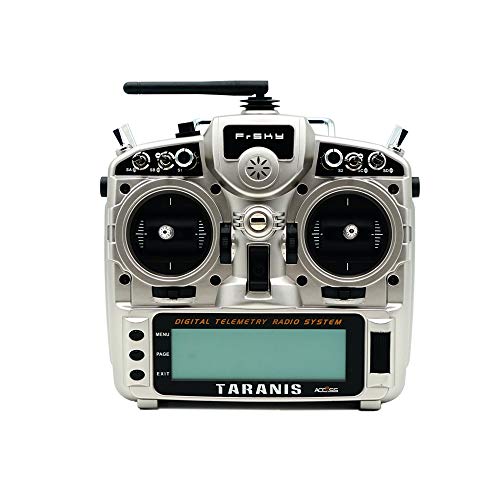 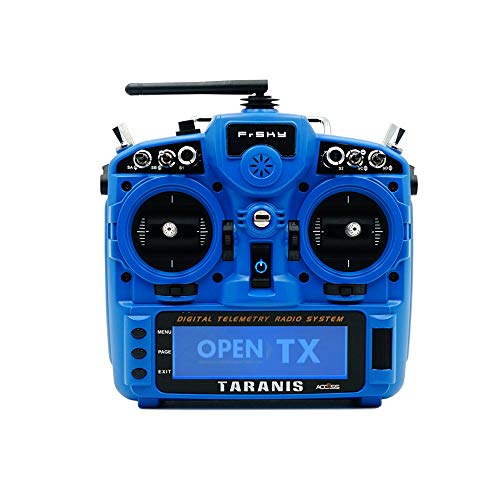 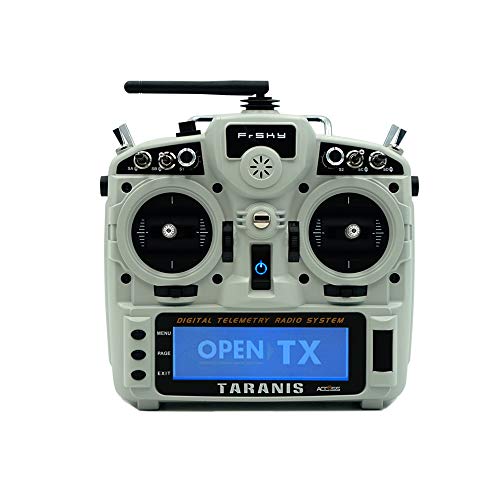 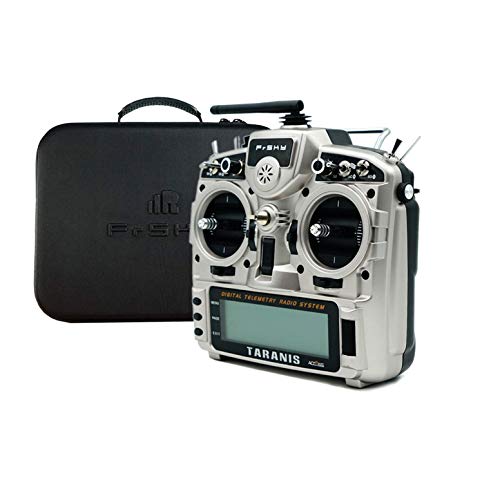 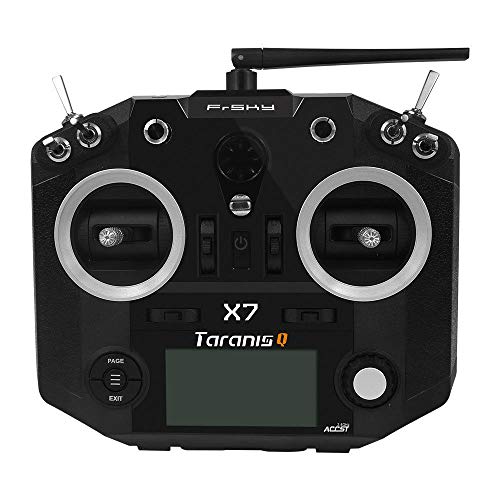 As is the case with the FrSky Taranis X9D, the antenna is fixed and can seem flat in an image or remain vertical. We did not pry open the radio ourselves but we did see it dissected on Oscar Liang’s blog. The radio is connected to a U.fl connector so it is perhaps possible that you can modify the antenna to the one with a higher gain.

Sticks and their feel

The version that we got our hands on had both the sticks located at the center and the left stick appeared to be a bit tighter in contrast to the right one. This is not a big deal since the tension and centering of the stick can be tweaked by opening up the radio and adjusting the screw on the gimbal.

This is a fantastic design to be honest since it exterminates the idea of purchasing a mode 1 or mode 2 radio. These are simply the mode default radios and you can tweak the sticks the way you prefer.

Owing to the wider body, we had concerns about whether we would be able to use the gimbals in a comfortable manner but as can be seen in the image given below, we could easily rest our middle fingers on the rubber at the back and pinch the sticks.

With the radio grasped in both the hands, the pinching was easy and we do not think that you would be having any issues while trying to flying your quadcopter with this radio controller.

If you use your thumb more, even then this configuration would be suitable to you. We used to rest our index fingers on the rubber and got a formidable grip on the stick with our thumbs.

As compared with the throw on the sticks of the FrSky Taranis X9D, the throw is slightly less in the case of the QX 7. The sticks are quite smooth and easy to deal with. The right stick was a bit resistant but that can be adjusted using the method mentioned above.

Comparing the FrSky Taranis radio’s side by side

You can see the Taranis 9XD and the FrSky Taranis QX 7 placed side by side. The X9D has a display screen that boasts a higher resolution in contrast to the QX7. This is natural since the QX7 is smaller in size. This is not a stark improvement but the difference is quite evident in the pop-up screen.

The QX7 has the headphone jack and the trainer port located at its shoulder while in the case of the X9D, they are placed at the bottom of the rear side.

The USB and the SD card port are located under a rubber cover at the bottom of the QX7. In addition, there are a couple of keys on X9D that you will not find in the FrSky Taranis QX7.

The FrSky Taranis X9D and Taranis QX7  costs vary. So, if you are new to the world of drones, QX7 is the way to go hands down. This radio will stay with you for a long, long time.