The Olympic drone display, featured in the 2020 Tokyo opening ceremony, is arguably one of the best displays of aerial art. In the ceremony, around 1800 drones made the sky dance to their tune, moving in certain directions across the Olympic Stadium. The drone enthusiasts will remember this aerial art for a long time.

Events in the Tokyo Opening Ceremony

The ceremony had a total of 1824 drones flying across the Olympic stadium. The aerial art produced by them was so exciting that we saw more of a three-dimensional look in a drone light show. It is different than a random drone show that we are used to. At the start of the Tokyo Opening Ceremony, the show was flat as we saw some simplistic shapes in the sky.

As we saw more drones in to the drone light show, we saw them flying around the stadium in 3D arrangements. The most important aspect of this drone light show was how the drones were flying effortlessly. The technicalities used by those drone users were arguably the best that we have seen.

The drones in the Tokyo Opening ceremony moved to the tune of John Lennon’s “Imagine.” The ceremony took place on Friday. With great enthusiasm, we saw athletes of different countries with their flags in the Parade of Nations. 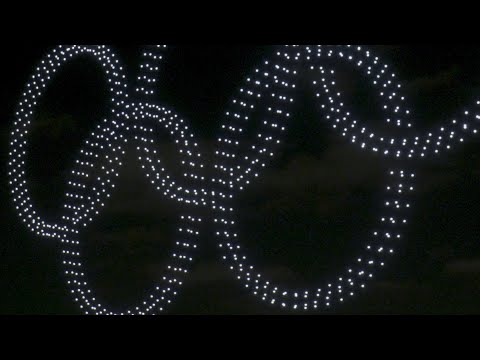 The Tokyo opening ceremony is not the first time we have seen drone light shows in the Olympic Games. Recently, Intel set a world record for most drones (1218) flown simultaneously at the 2018 Olympic Games. The drone makers recreated the drones in different shapes, such as snowboarders and Olympic rings. A similar performance came in the closing ceremony in which drones flew in different customs, such as Soohorang and mascot.

Drones are becoming important in Olympic events. Now, the question remains that if we will see drone racing as an Olympic sport or not.