Drone soccer is a thrilling and fast-growing newest e-sport, played by two teams, every team is composed of at least three players. This game is played by equal team player sizes that could be 3/3, 4/4, or 5/5 and there will be a maximum of ten players.

What it does is, each player controls a drone, and the aim is to score the maximum number of goals. Each sport includes 3 units lasting 3 mins each. Drone soccer is an indoor and outdoor game, played in a particular flying zone area that measures twenty meters by ten meters. Drone pilots operate drones, they stand at either end of the game pitch and only one player on a team can score by flying a drone and the remaining players help their striker by protecting their goal.

Literally, It’s a fun-loving e-sport that has changed traditional football games to a new level.

Firstly, this game was invented and played in South Korea in 2018 and its debut was “The 2018 Robo Universe Drone Soccer” where twenty-two drone soccer teams competed to get the championship and become an official international sport of the World Air Sports Federation (FAI) from 1st May 2019.

According to a new sports report published in 2021, The Korea Drone Football Association is organizing a drone soccer international center for the first drone soccer world cup in 2025 and for this sake, eleven billion funding is provided by the city of Jeonju.

As we already know that this game can be played indoors as well as outdoor there for U.S Drone Soccer is led by President David Roberts and is said to be a kid game in grades 6-12, played in classroom lessons and after-school leagues too. It is the one and only competitive student robotics program and robotics game that is recognized as an International Sport by FAI.

It is an open-source software program that allows students to reprogram the drone and rebuild it for an advanced aspect of learning techniques. According to David Robert, “Whenever any student flies a drone but that turns into damage or crash and the student makes repairs for the first time– become a great engineer for life.”

U.S Drone Soccer uses Saker DS200, known as “Bantam” DRone Soccer Ball, which is made by iFlight RC manufacturer, they build trust about its quality, durability and it can easily be repaired by using simple tools. Its weight will be under 25 gram. There is no need for registration with the FAA, you can enjoy this game without any issue.

The price of only a drone soccer ball kit is $219 and you have to pay $59 more for the Radio Master T8 Radio Controller. There is a Kickstarter campaign running through February 20222 in which a complete bundle consisting of a drone along with accessories is available at the discounted price of $375 and after that would be sold at $410 or more than this.

If you want to buy more drones then there is also a bundle available in the market, called “Learn”, which includes five drones with complete necessary spare parts at $3300. There is another bundle called “Practice”, which includes 12 drones with two spares and a collapsible practice arena at $8800.

If you wish to play in the official league then your registration will be compulsory in U.S Drone Soccer additionally you must have pilot insurance and you should have a membership of the Academy of Model Aeronautics.

AN OVERVIEW OF DRONE SOCCER MATCHES:

This July 2022, The World Air Sports Federation is going to hold World Games in Birmingham, Alabama. Another good news about the drone soccer games is, Student Leagues and tournaments are organized in Colorado, New York, and Ohio throughout 2022. The very first national-level tournament will be conducted in Denver, Colorado on April 30, 2022. 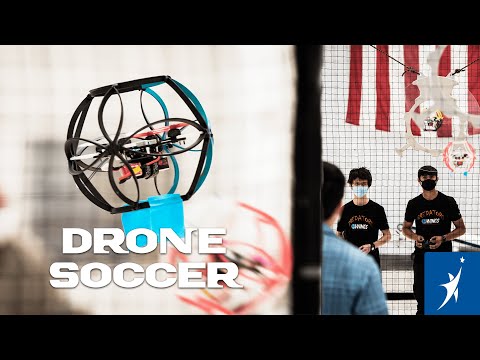 U.S Drone Soccer is integrated with many drone players and a strong relationship with the Academy of Model Aeronautics gives pilots insurance to fulfill and clear the Recreational UAS Safety Test (TRUST) with the FAA.

It would be refreshing and interesting to see drone technology involved in so many entertaining ways beyond industrial and commercial ways and enhance the public opinion of drone technologies.

If you are thinking about creating your drone soccer expansion league then click here for more details.