Plenty of manufacturers are currently working on delivery drones. If they do become common in the coming days, development of aircraft control systems to prevent them from bumping into each other would be of vital significance. That is exactly why Google, NASA and the Federal Aviation Administration are working on the creation of such systems. Here’s food for thought though: if we are going to have loads of small unmanned aircraft systems soaring in the skies following some complex routes, why shouldn’t we let them drive as well?

This is what researchers at MIT have been taking a close look into: developing the first path planning system that is able to manage transformer bots that can fly as well as drive. The hardware here in this video is not all that alluring but it is the path planning system that is significant here since it seamlessly decides the path of each device; thereby informing the drone when to drive and when to fly in order to conserve as much energy as possible.

According to researcher, delivery drones that can drive and fly have their own benefits. They are of the view that drones that can drive are much more stable and energy efficient and are suitable for flat terrain. On the other hand, quadcopters are not less energy efficient and boast low battery life span despite being highly agile and swift. So, a combination of these two results into an energy efficient vehicle that is swift as well as agile. They believe that such an autonomous vehicle could be useful for reconnaissance, disaster relief, search and rescue and even delivering packages. 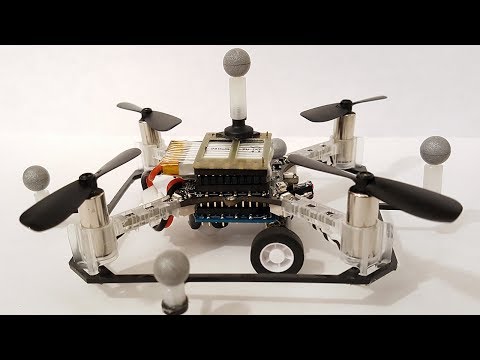 The application that has been developed by researchers at MIT is able to manage 80 vehicles simultaneously. However, so far tests have only been conducted for 8 vehicles navigating a small town shaped model. The vehicles were informed about the roads and areas where they were allowed to fly. The devices, in turn, mapped out their routes automatically between already decided start and end points; all while avoiding any accidents or crashes whether on the roads or in the air. This is a point to moot for Amazon as they are in the middle of developing their delivery drones .