There are a lot of Star Wars fans out there and if you are one of them then you would remember Star Wars Episode 1: The Phantom Menace. One of the most exciting things about that wonderful episode was pod racing. Here, we will be talking about its transformation to FPV Drone Racing.

Pod racing was actually a contest among flying machines at incredible speeds. The race was so magnificent that it was not possible for humans to keep up with the pace.

Well, that film has been transformed into reality with what is nowadays called FPV drone racing and it could be your next hobby.

First Person View is a system of drone racing wherein the pilot instead of banking on line of sight to maneuver his drone, controls the machine via the cameras integrated into the aircraft. This is accomplished either by watching a screen or putting on a pair of goggles. Of course, video goggles offer an immersive digital experience and get rid of problems such as sun glare but they certainly are a more expensive recipe in contrast to screen based FPV. 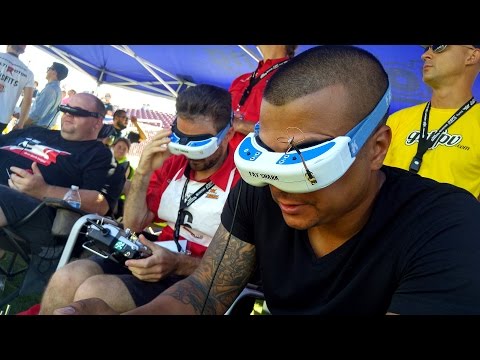 Rather than rambling on and on about what FPV is, it is better that you should take a look at this video. Here is a great example of what FPV drone racing is all about.

Before you get going

It is important to keep in mind that you would not want to get acquainted with the art of flying on a $500 machine. It is bound to get crashed almost the instant you try to get it airborne. There is no point in trying to do this is as well. Micro and nano drones cost less than $50 and are loaded with similar features and control mechanisms and need the same set of flying skills.

Here is a post on the drone’s cost under $50. You can get your hands on some of these and then learn how to fly them without getting freaked out by the finances involved. Until you get adept at flying one of these little things, you should not make an attempt to go big.

Ready to fly or Do it yourself drones?

When starting off with drone racing, one of the first choices that you’ve got to make is to determine whether you are willing to purchase a ready to fly drone kit or you want to build your own racing drone from scratch.

If you are not much of a tech geek or into engineering, then you should opt for the pre-build variant at least in the beginning. Having said that, you will get to understand the fact that you will have to fine-tune the aircraft in line with your flying style and performance requirements sooner rather than later. It is also going to be advantageous to be acquainted with different components of the drone since you will probably have to make a few repairs once some of them get damaged or wear out. It will waste your precious time and will also prove costly if you bank on others to do it for you.

Getting to know the components of FPV drone racing

A quadcopter consists of tons of components.

Firstly, there is the chassis upon which all components are mounted. The chassis can be made from different materials and a decent frame is light and reliable. Some high-end frames are even made of carbon but they are quite costly.

Then there are four motors, propellers, and the Electronic Speed Controller (ESC) which are responsible for lifting the drone into the air and assist in its control.

The fight controller may be regarded as the brain of the drone which is loaded with different sensors to ascertain its altitude and other parameters related to flight control. The sensors typically include gyroscopes, accelerometers, and GPS and are integrated into the machine. Reliable flight control is actually responsible for ensuring a stable machine that turns the corners at amazing speeds in a seamless manner.

A drone is typically powered by a power source in the shape of LiPo batteries.

LIKE TO READ  Drone Battery - A Guide to Understanding LiPo Batteries

An integrated camera along with FPV goggles or monitor will be required for the First Person View. A transmitter will be required to control the drone, a charger for the batteries, and a soldering iron to solder everything together.

Similar to other racing sports, drone racing also has vehicle classes or categories. You need to abide by certain rules and regulations if you want to participate in a certain racing class. Fortunately enough, most drone races have two classes.

The beginner’s class known as the “spec” class makes it mandatory for the contestants to use a drone with a three-cell LiPo and propellers with a 5” diameter.

The open class is meant for the seasoned pros and has no restriction on what can be used within a certain weight limit.

Local racing organizations can have their own rules but these two classes are the most common.

Even the micro drones are not toys! You can comfortably hurt someone in your surroundings with them. As a matter of fact, really high-performance aircraft can inflict life-threatening harm to people.

LIKE TO READ  Popular Mini, Micro and Nano Quadcopter Drone

It is crucial that you start slowly, fly in areas where it is safe to do so and abide by the local rules and regulations.

There are certain rules that you should take into consideration even in the absence of local laws. It is important that you do not fly a drone over people or animals as it can cause serious injuries.

Ensure that the battery is disconnected while handling a drone with hands.

Also, take care that you handle the LiPo batteries with due caution as they can easily explode or catch fire.

Finally, avoid becoming a street racer and only participate in organized events.

The important thing to keep in mind with FPV drone racing

Fun is the most important part of FPV drone racing and you don’t want to lose out on it. Drone flying communities are cropping up everywhere in the world and are brimming with friendly people who are looking to share their expertise and experiences with each other. You can ask other racers and drone pilots about the different things that come to your mind. Maybe you have in you to become the next drone racing superstar when drone racing gets mainstreamed.