Have you ever imagined getting your hands on a gizmo that can be triggered to discover some gold in your backyard while you sleep in the comforts of your bed? This is a dream, right? This dream has been transformed into a reality by the RadioPlane Seeker drone which is a modular, autonomous flight machine.

First and foremost, the RadioPlane Seeker drone is nothing like the mighty DJI Phantom or Parrot Bebop drone. This is a drone engineered essentially for finding and not capturing video footage.

Boasting a modular design, this machine lets you attach different components for different purposes, autonomously and as and when required. But the component that we are familiar with, at the moment, is the metal detector attachment.

As can be viewed in the image, a metal detector is attached to the rear end of the aircraft. The company claims that the metal detector attachment is the first completed module of the machine that is currently being fine-tuned for official certification so that it can be eventually used to clear minefields. In addition, the company adds that the RadioPlane Seeker Drone also doubles up as an autonomous gold detector which aims to make the seemingly complicated task of discovering precious or other metals automatically, all the easier.

The user is not required to scan the entire field with their own metal detector. This could open new vistas of opportunities when it comes to scanning minefields and finding out precious metals. Even if the machine is not used for commercial purposes, the drone could be a whole lot of fun.

Is it self-flying totally?

The drone comes with a mode of flight that renders the machine completely autonomous. But it can be flown manually as well.

The drone can be maneuvered by a long-range radio controller or the RadioPlane mission planner application for short distances if the pilot intends to fly the drone manually. The Mission Planning application also lets the pilot configure the drone for a completely autonomous flight adventure.

The RadioPlane Mission Planning application is a user-friendly software that lets a pilot sketch a flight trajectory on a touch screen and press start. The app has the ability to notify one or multiple users at the same time if it finds out something worthwhile in real-time and logs are also created for important discoveries.

Indeed, the drone can be maneuvered by a radio controller but we would prefer to use its autonomous flight feature. As discussed above, the mission application is quite easy to use as the pilot simply needs to draw the intended path of the drone, ensure that it is highlighted, and tap on the “Go” button. No-fuss at all!

If you are skeptical about the drone’s behavior when the battery runs out of juice, then do not fret because the manufacturers claim that in such a dreary situation, the drone flies back to its special RadioPlane Charging Pad where it is recharged automatically and the mission is subsequently resumed until completed.

This can be quite a dangerous business! That is why the aircraft utilizes GPS, cameras, and GNSS systems to avoid obstacles in its path.

You can think of it as the Intel Real Sense technology built on top of the Typhoon H. Autonomous flight operation is not seamless at present but they are working on it.

How much does RadioPlane Seeker Drone cost?

There is no official price tag set for the RadioPlane Seeker drone currently but for a donation of $3,400 on Kickstarter, they will ship you a prototype model.

This sounds quite costly but the device packs a powerful punch. The company plans to initiate the crowdfunded Kickstarter campaign soon but at the moment, enthusiasts should donate 5, 10, or 15 bucks to help the newcomers out.

Here is the link to preview the company’s innovation.

As far as the size is concerned, the drone is quite large in size but can be retracted to the size of a 17” laptop. For a drone equipped with such sophisticated tech, this is a reasonable enough size. Here is the top view of this drone.

What do you think about this revolutionizing drone? Do not forget to share your comments with us! 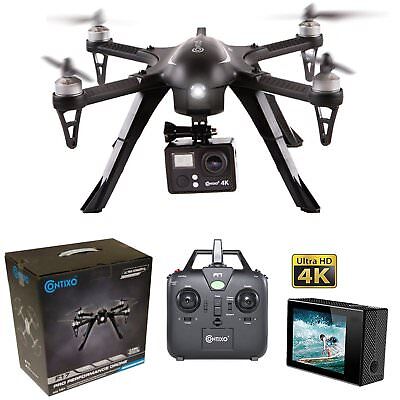