We had our first glimpse of the AirDog’s New Drone at the Consumer Electronics Show in 2015. At that point in time, it was the only drone out there that was equipped with the ability to track down and follow its pilot. With the help of an electronic leash studded with sensors, it used to transmit precise data about the location of the pilot and to forecast about the next position of a fast moving object, say on a skateboard. This astonishing feature made it a thing to beat for some of the leading drones as DJI Phantom and DJI Inspire.

Two years down the line and there has been remarkable changes in the market scenario. Almost all drones out there can follow their users. DJI drones are able to detect and avoid collisions and are able to fly autonomously. The sizes of drones are becoming smaller while their capabilities are being enhanced with every passing minute.

All this demands a change in approach. The original AirDog’s New Drone was supported by a $1.3 million Kickstarter initiative. The Latvian company responsible for the drone have now come up with a newer version of their flagship device. The entity is raising funds for AirDog 2 which is an advanced version of AirDog and bills to take the level of technology to the next stage. 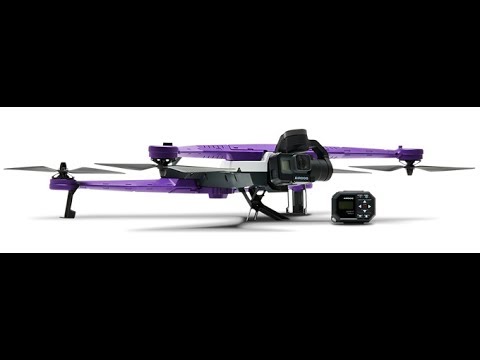 A large number of drones nowadays bank on a blend of GPS and computer driven vision tracking technology to follow their user. AirDog 2, on the other hand, continues to rely on the battery operated leash that is put on around the user’s wrist. If you are an action sports fanatic, then all this should make pretty good sense. The leash is waterproof and ensures that the gadget follows you seamlessly while both your hands are free to move about. Most of the drones powered by computer driven vision technology lose track of you when you happen to pass behind trees or under a wave. That is absolutely not the case with AirDog’s New Drone.

The leash comes with a small backlit LED screen that is viewable even in bright sunlight. You can also set waypoints, start and stop a run, configure the mode, return to your base station, takeoff hand land by pressing a couple of buttons right from the leash. Action sport junkies would never want to rely on a heavy dedicated controller or a smartphone. So, this small sized leash tagged to their wrists is a pretty cool solution to all their eternal woes.

A sensor package, placed just at the underbelly of the drone, ensures that it detects and avoids obstacles beneath it which is a great feature for a device that is intended to cover plenty of downhill action. In such situations, there could be sudden variations in altitude and the height of trees or poles could be very different from that of the athlete or the ground. With a triple axis gimbal, the engineers have added more stability to videos and images.

I tested it out while riding my electric bike. The unit was able to follow me even through dense cover but in the video footage, on several occasions, I found myself at the edge of the frame or even out of the shot completely. Keep in mind that the drone does not have any remote control that could be used to manage the frames and shots while the device tracks you down.

On the whole, I think that AirDog’s New Drone will have plenty of competition to face to. Early supporters on Kickstarter can bag this device for $999 but its retail price is about $1500 which way more costly than the latest products by DJI or even Yuneec. It has wings that can be folded up but still it is bulky in comparison with the DJI Phantom or DJI Mavic Pro and so its transportation for outdoor adventures can be a bit of a hassle. The device uses a GoPro action camera and also comes with the ability to start and stop the video remotely. Other than that, nothing much can be done in terms of camera customizations mid-flight.

Currently, DJI are at the top of the consumer drone market with their Chinese counterpart, Yuneec, vying for the second spot. Parrot is reducing its drone division while 3D Robotics bowed out of the drone arena after Solo received massive setbacks. GoPro has not been able to make a mark with Karma. I hope that AirDog’s New Drone will be able to make ripples among action sport fans. But considering the fact that DJI are pushing boundaries when it comes to advanced technology and they are the best in the consumer drone world, it really will be interesting to see how AirDog is able to respond to such high pressure.

Way back in 2015, AirDog’s New Drone was a unique addition to the drone industry. But that is no longer the case now. AirDog 2 is certainly offering plenty of new stuff and upgrades in comparison to its predecessor for the supporters at Kickstarter. But it still lagging behind its competitors in terms of price, portability and autonomous flight features. Moreover, the absence of a dedicated remote controller implies that it can only be used for tracking shots and that can be done with the help of a leash only.

They are banking on the fact that action sport enthusiasts will be attracted by the prospects of a hands-free experience and will prefer to use a leash tied to their wrists for controlling the drone. Things are not going to be easy but the manufacturers are keeping their fingers crossed. The first 250 units are ready to be shipped to the Kickstarter supports this August.