Commercial drones are becoming more and more popular with every passing day. A lot of enterprises are discovering the utilization of drones in their work domains and are beginning to employ them to enhance their efficiency. Modern-day technology has made it possible to ensure that drone shows far broader purposes than simple data collection. As a matter of fact, it is just a splendid sight to see the drones soar through the skies.

Drones can be used in a number of ways in art. As a matter of fact, the technology appears to be limited but not innovative. Flying a drone indoors or arranging hundreds of drones to fly in a pattern is quite a hard job considering that plenty of accuracies, timing, and navigation are required to accomplish it.

Drone shows and their applications

Drones shows can be broadly categorized into indoor and outdoor operations. This distinction is not based on the legal context but on the way they navigate.

A stable and accurate GNSS connection is not available indoors, so the operators are forced to employ other navigation mechanisms such as motion control systems or indoor positioning systems. This makes the show’s preparation a hard nut to crack. Moreover, uninstallation and reinstallation are also quite complex processes. For instance, the Muse tour has to change its location every second week for different cities.

LIKE TO READ  Siberian Tigers Tear Apart a Drone

Human pilots are still required for indoor and outdoor operations such as CTRLme and Aerotain. As the number of drones in the swarm increases, their maneuvering tends to become more and more complex. Thus, completely autonomous and separately pre-programmed drones are more reliable and safer when it comes to arranging massive displays.

Intel’s Drone 500, Skymagic’s show at Mount Fuji, Collmot Robotic’s multi-drone light show, and Verity studios show Paramour are some of the leading drone shows that are enchanting millions around the world. 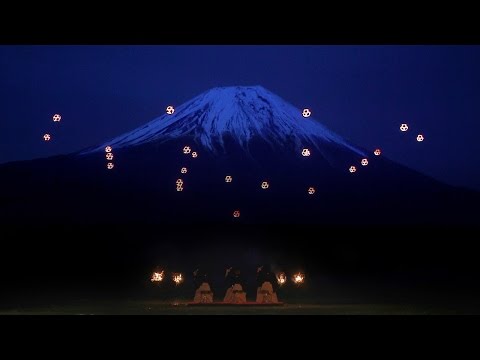 The safety standards for both indoor and outdoor operations are quite high to ensure the safety of the audience. Safety mechanisms integrated into the drone such as the helium balloon cover used by Aerotain or redundant flight control systems or external systems such as geofences or grids can be employed.

Why shows are not mainstream yet?

The swarm and night operations of drones in addition to their flights over crowds is illegal in most countries. Moreover, the configuration and re-programming of drones is another hurdle that tends to discourage broader adoption. This manifests why drones are not gaining broader adoption among drone pilots and are still considered rather exclusive events.

Lady Gaga’s Super Ball halftime drone show was one of the largest and most enthralling shows this year. The drone show, however, was prerecorded so the television audience was only able to witness the splendid spectacle. As the singer stood on the roof of Houston’s NRG stadium, the drones portrayed a scintillating background.

LIKE TO READ  New World Record with Ehang Ghostdrone 2.0 on Chinese New Year

A large and higher scale of repetition is required to ensure the operation of drone shows. Disney World has already filed patents to integrate drone shows in their regular fireworks shows.

As soon as swarm intelligence becomes more potent, the costs associated with drone shows are likely to come down. This will reduce the hard effort required to program each drone separately. Knowledge acquired from this innovation will be beneficial for the entire industry and will encourage drone operators to utilize enhanced indoor navigation mechanisms and swarm intelligence at a wider scale.