Home
Blog
How to Hand Launch and Hand Catch a Drone

This tutorial is geared towards assisting drone pilots in learning how to hand launch and hand catch their beloved DJI Mavic Pro and DJI Mavic Air drones.

You must be wondering why one would want to hand launch and hand catch a drone when there is a seemingly feasible option of making it to take off from the ground and land back on the surface. If you are someone who takes a fancy to drones such as DJI Mavic Pro and DJI Mavic Air, there will come a point in time when the nearby surroundings are inhospitable, sandy, wet or dusty.

These kinds of situations can make it rather complicated to make the drone take off and while the propellers are rotating, the presence of loose particles and dirt and grime enhances their probability of flying and ending up in motors of the propellers which could cause serious damage to the drone.You can also easily forget to bring the drone takeoff and landing pad with you or you can prefer to launch your drone from a moving vehicle such as a boat. In case of an uneven surface such as a boat or sand, launching the drone can be cataclysmic.Whatever the situation, the following tips and tricks can come in handy to hand launch and hand catch a drone.

LIKE TO READ  How to Make a Custom Drone Landing Pad 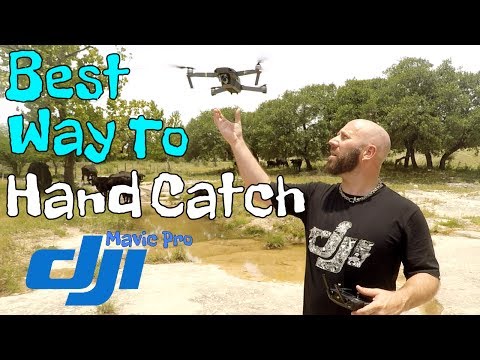 Before we begin, it is important to underscore that it can turn out to be a risky proposition to hand launch and hand catch a drone so we would advise you not to try it unless you are experienced enough and feel comfortable in maneuvering your device. If caught in the wrong fashion, the drone propellers can easily cut through skin so caution is the name of the game here.Ensure that there is minimal wind around and you have protective gear such as gloves, eyewear, helmet and propeller guards loaded on your drone.We will transitioning between DJI Mavic Pro and DJI Mavic Air images but keep in mind that the same principles will apply to both the machines.Let’s get the ball rolling then!

How to hand launch your drone

1 – Safe Area
First and foremost tip on the list is to find a safe location to take off your drone from so that it is away from people and any other obstacles that may hinder your flight. Analyze the area closely as there is always an impending danger of a kid or an animal running in without you realizing. Ideally, you would want a buffer zone with a radius of several feet around your drone.

3 – Hold the drone high
The drone should be kept above the height of one’s head and as far away from the face and body as possible.

4 – Auto takeoff
With the controller held against your body or placed on ground or some other surface, prepare the auto takeoff button on the left hand side of the DJI Go app but do not slide it until you are sure that you are in a safe position to let go of the machine.

The propellers will begin to spin and the drone will start to rise in the air.Do not let go of the drone immediately but try to release your fingers slowly while letting the drone leave the confinement of your fingers naturally.That wasn’t all the difficult to hand launch a drone! Wasn’t it?

How to hand catch a DJI Mavic

Grab the drone in your hand with you positioned in a comfortable manner before you even trigger it on.

2 – Safe area
Find a safe location to take off your drone from so that it is away from people and any other obstacles that may hinder your flight.Analyze the area closely as there is always an impending danger of a kid or an animal running in without you realizing.Ideally, you would want a buffer zone with a radius of several feet around your drone.

3 – Get ready
Let the drone come close enough to you so that you can latch onto it and get hold of it. Form the shape of your hands as if you were throwing a paper airplane or a football.Before you grab it, let the drone hover just above head height (of course not directly above your head) while keeping your face and body as far away from the drone as possible.
Get yourself ready, extend your arms and hold onto the drone while ensuring that your fingers do not get entangled with the spinning propellers.

4 – Throttle Down
Press the throttle until the motors are turned off as soon as you grab onto the drone.You can also opt for the drone Auto Land feature to have the drone land directly on the palm of your hand but do not try it in a moving vehicle.
How to hand catch smaller drones such as the Mavic AirSmaller and foldable drones such as the DJI Mavic Air and Parrot Anafi can be caught with an open hand instead of a grip like catch. Here is a video tutorial prepared by Jeff Greene on how to catch the DJI Mavic Air.

How to hand catch DJI Phantom 4

Thanks to the more surface area to grab onto, drones with fixed legs are easier to grab from thin air but you need to ensure that you hold onto the leg and not the gimbal. If you grasp onto the quadcopter way too tight, it can result into stress cracks so the grip should be firm enough to ensure stability. Let the drone hover above your head height for some time.

With one hand on the controller, allow the drone to make the descent. Place your other hand beneath the quadcopter and grip the DJI Phantom 4’s leg like a gun once it gets closer to you.
Ensure that the thumb is placed around the battery compartment with the remaining fingers holding onto the leg.
Wait for the motors to switch off with the drone in your grip.

1 – Get ready
Ensure that the area surrounding you is free of people and obstacles. Then bring the drone down so that it is several feet above your head and no exactly above it.

2 – Auto Land
Prepare the Auto land button located on the left hand side of the DJI Go App but do not slide it.

3 – Position Set
With the radio controller held against your body or placed on the ground, position your hand underneath the location where you expect the drone to land as it begins its descent.Once the hand is in the right position, slide the Auto Land switch and let the drone come into your hand while ensuring that your fingers do not get in the way of the spinning propellers. Once the drone is in your grasp, hold onto it tight and wait for the motors to get triggered off automatically.And that is how you hand catch your drone with Auto Land feature turned on. Ensure that you practice the aforementioned tips and tricks in a wide open space void of obstructions and distractions. These things take their time so you would want to ensure that you are comfortable with them so that when the time comes, you are ready for them. 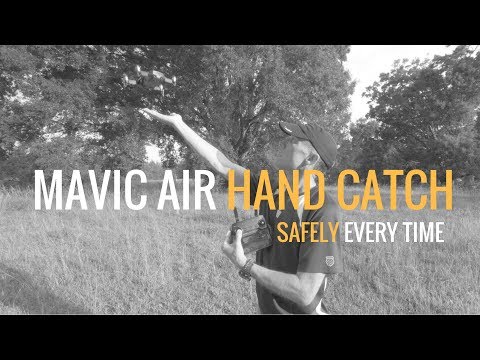 Hand catching a drone is a technique best suited to experienced drone operators. Novices can always resort to land equipment and mats to help land their drone in a safe manner. FreeWell has come up with high quality landing paraphernalia to assist a drone land in areas such as tall grass or in a small puddle of water and they even have created landing mats for uneven surfaces. But hand catching a drone has its own charm associated with it.
You can also throw a towel on a drone as a hand catching alternative similar to what Will Smith did in this YouTube.video to land the DJI Mavic. It can cause serious harm to the drone in the long run as the motors get switched off abruptly after being caught in the towel but it is worth a try if you are caught in some sort of an emergency.

But keep in mind, caution is the name of the game, folks!