Does your kid want an exciting gift on his or her birthday this year? If your response is in the affirmative, then a new drone could be the way to go. The glow in the dark version of the Striker Spy drone will definitely capture your kid’s imagination. This drone is tailor-made for both indoor and outdoor excursions and presents a great opportunity to take aerial imagery up to a control range of 50 meters. Having said that, do not get fazed away by the name of the drone as it has surely not be engineered to let your kids invade the privacy of your neighbors. Such an irresponsible attitude can earn you a bad name in the neighborhood and even before the law enforcement agencies so responsible flying is all that we profess. Check out the price of the Striker Spy Drone below!.

An Overview of the Striker Spy Drone

The Striker Spy Drone comes equipped with an integrated camera that has the ability to capture videos and images. The captured aerial imagery can be stored on a memory card which can be viewed later. Considering the price, you won’t be getting sophisticated video footage and images but the aerial view still can blow anyone’s mind away. This fantastic toy drone is surely a great gift that will help your kid spend their leisure time with great fun. The drone can be maneuvered using a radio controller or an app. The glow in the dark functionality of this drone enables your kid to even fly it at dusk or in the night. It comes with four LED lights (check more drone lights here) which make it further easier to be spotted in dim light conditions. Manufactured by World Tech Toys, the Striker Spy Drone has seen massive popularity amongst consumers ever since its launch.

Who should fly it?

The Striker Spy Drone is a toy drone and suitable for kids above 14 years of age. It comes with plastic construction which means that it is extremely light in weight and easy to maneuver just like mini quadcopters. It has been designed for kids who love to have some with short video clips and does not offer much support for extended videography or photography sessions. Having said that, if you are a drone junkie, then the fact that the Striker Spy Drone is a toy drone should not prevent you from getting your hands on this tiny little gadget. Owing to limited storage space, larger files cannot be stored on the memory card and hence the short videos cannot be used for real-time video transmission or viewing. The Striker Spy Drone is affordable and does not need to be registered with the Federal Aviation Administration (FAA). So, there is no question of flights in unauthorized air spaces.

The original packaging contains the Striker Spy Drone, a 2.4GHz remote control transmitter, a 2GB memory card, memory card adapter, a USB charging cable, four addition rotor blades, a user manual and rotor guards.The battery timing of the Striker Spy Drone is not huge so it would have been nice to get spare batteries in the original packaging for longer flight times. You can purchase other spare parts and components of the toy drone from the manufacturer’s website at worldtechtoys.com and other online retailers such as eBay.Below is a YouTube video showcasing Striker Spy Drone’s unboxing.

• Comes with a camera with capability of capturing images at a resolution of 1280 x 960 pixels and videos at 640 x 480 pixels along with mono audio capability at 16KHz
• 2.4GHz remote control transmitter to control the drone from the ground with throttle sticks, a speed button, electronic information display and camera controls
• A 2GB memory card for storing videos and images
• 500mAh LiPo battery with an output voltage of 3.7V and four AA batteries for the remote control transmitter
• The glow in the dark design ensures that the drone can be flown in the night as well as at dusk. Videos can be captured at 720 x 480 pixels while images are taken at a resolution of 1280 x 1024 pixels
• The toy drone comes with four channel controls so that it can be maneuvered in the desired direction
• Equipped with a 4.5 channel gyro for stable and smooth flight
• It is made of plastic which makes it lightweight and suitable for indoor flights
• Dimensions: 12 x 12 x 2.75
Cons:
• Low weight of the drone means that it cannot sustain strong winds so it is more suitable for indoor usage rather than outdoor usage
• The low voltage of the Striker Spy drone battery means a short flight time of just 4 minutes
• The drone tends to get hot which can damage motors
• The camera is not great so you won’t be getting high quality videos and images
• It is not loaded with First Person View features so there is a likelihood of the drone getting lost during flight. 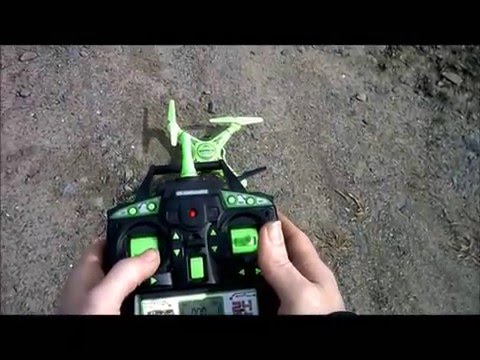 Get the drone fully charged up and place it on a smooth flat surface. Insert batteries into the remote control transmitter and wait until gyro stabilizers have initialized after switching on the drone.Now, pair the transmitter with the drone by pushing the throttle to maximum and then back to zero.

Once the two gizmos have been paired, you will hear a beep. The drone is ready to takeoff!It is advisable to fly the drone at lower altitudes first and then gradually increase the height. At higher altitudes, the drift of the wind has to be controlled by moving the drone in the direction opposite to the wind.Avoid using the drone near walls and other obstacles to prevent crashes. It should not be flown above people and the instructions mentioned in the user manual should be adhered to.

There are a number of shortcomings that are associated with the Striker Spy drone. It is lightweight which means that it is unable to sustain strong winds, boasts short flight time along with the risk of the motors burning out. The components may need to be replaced constantly which may or may not be available while the shipping time can also be a cause for concern. Having said that, there are other options available on the market. You can get the Syma X5C from Amazon which comes across as a brilliant alternative to the Striker Spy Drone. It offers solutions to the above-mentioned deficiencies and presents a great opportunity for your kids to spend quality time.

It boasts a higher user rating of 4.5 on Amazon in contrast to the user rating of 4 attained by the Striker Spy Drone. The higher quality camera in the X5C lets you capture great video footage and images. The photographs are captured at 2MP while videos are recorded at a resolution of 1280 x 720p. The six-axis flight control enables the pilot to capture videos and images from different angles in contrast to the four-channel controls offered by the Striker Spy Drone which restrict the aerial maneuvers that can be performed in the air. The X5C comes with a protective plastic encapsulation that protects the blades from easily getting damaged. It offers a flight time of seven minutes and the batteries take an hour and a half to get charged up completely. The drone is lightweight but it remains stable enough in windy conditions. However, stronger winds can still carry it away.

The users have complained a lot about the short flight time of the Striker Spy Drone. Four minutes of flight time can turn out to be extremely short. To get rid of this issue, you can get your hands on spare batteries to enjoy uninterrupted flight adventures. Here are some of the drones with the longest flight times. There have also been complaints of faulty drones delivered along with the unavailability of components. The manufacturer offers a return policy as the product can be replaced by a new one. You can also get the components from the website or other online retailers. The absence of First-person view functionality can be resolved via the app. Real-time images and videos from the drone can be viewed directly into the app.

The Striker Spy Drone is a great toy drone in spite of its shortcomings. It lets you child traverse the skies while spending some quality time. It offers great value for money and boasts intuitive controls. It sports a user rating of 4 on Amazon and can turn out to be a great source of making memories for you and your kids.